Illinois Plans to use IoT to “Get Smart”

The City of Chicago Technology Plan outlines a roadmap in which leaders in the public, private, and nonprofit sectors work together to build stronger companies and a smarter city, using big data, civic engagement, and technology start-up incubation (Letter from Mayor Rahm Emanuel). The past 18 months have shown significant strides towards realizing this vision.

In January 2016, Governor Rauner issued an Executive Order 01-16, establishing the Department of Innovation and Technology (DoIT), a new state agency with responsibility for the information technology functions of agencies under the jurisdiction of the Governor.

Both initiatives entail the use of cutting edge technology to improve local government’s ability to serve the public, while simultaneously raising the bar and setting new standards for Smart Cities of the future.

DoIT’s mission is to empower the State of Illinois through high-value, customer-centric technology by delivering best-in-class innovation to client agencies fostering collaboration and empowering employees to provide better services to residents, businesses, and visitors. To achieve this goal, the department has begun migrating disparate and obsolete data systems to a consolidated SAP platform (for more on this check out Phil Weinzimer’s article on Digital Thirst) that will allow employees to save customers time and frustration having to visit multiple offices to complete transactions.

While organizing data into streamlined, more accessible platforms is an important step towards enabling a “smarter” city, intelligently processing and extending that data is what will make the endeavor worthwhile. Enter the Internet of Things, or IoT. While it is not necessarily spelled out in the current plan, IoT is arguably the next logical step for the state to take in terms of adding efficiencies and intelligence to government services.

For those unfamiliar with the term, the IoT is basically a network of things talking to things, and applications making decisions about what to do about what they are *saying* to each other. For instance, a smart panelboard talking to an application on a server at ComEd might alert ComEd to a power outage that in turn could cause another app to dynamically re-route power through the smart grid to avoid a lengthy service interruption. Emedded sensors in streets might trigger snowplows to be dispatched based on predetermined criteria, streetlights could self-report burned out or malfunctioning lamps, and a zillion other use cases.

It’s no coincidence that the IoT Emerge 2016 and SmartGig Chicago conferences have been scheduled to coincide with each other this week at McCormick Place. Both conferences promise to offer information, inspiration, and opportunity for technologists, manufacturers, engineers and business leaders throughout Chicago.

Working together, Chicago’s suppliers, developers, service providers, and civic leaders can build a Smart City model that would attract new businesses and bolster the local economy, and have the potential to extend beyond the state’s borders. Paramont EO is doing our part to supply smart homes and buildings throughout Chicagoland and beyond. To learn more visit our website at: https://www.paramont-eo.com/get-smart 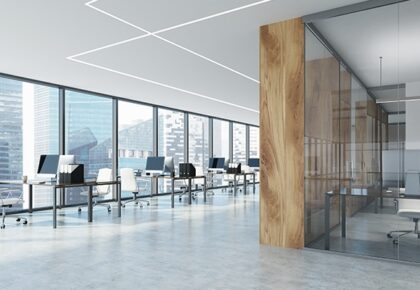 A SIMPLE LINE OF LIGHT from Acuity Brands

Technology is evolving, changing the way we work and how we interact with our built environments. This creates more opportunities and more complex challenges to solve. Aesthetics, quality and tailored control of light are critical to delivering a comprehensive solution for your design. Technology is also enabling our lighting to be smarter, smaller and […]

We were so glad to got to share our story with the folks at @EA Chicago earlier this summer, and apparently they liked it so much they decided to include a feature article in their summer magazine about our experience! Check out the full article here:

Hey Alexa- Did the Cubs Win their Opener?

If the answer is “yes”, you could win an Echo Dot! Just be one of the first 3 customers to purchase a Lutron Caseta Wireless Lighting Control Kit at Paramont EO, and you will receive a free Dot to help use your new smart lighting controls from almost anywhere inside or outside the house!

It’s been a while since we’ve talked about LiFi

But now there seems to be a WHOLE LOT more to say about it. For those of you new to LiFi, the term stands for Light Fidelity and is a method by which light is used to transmit data for two-way, high-speed wireless communication like WiFi (but via light waves instead of radio waves). Specialized […]

Paramont EO and Crest Lighting are working with the Chicago Lakeview East Chamber of Commerce to promote the Arts in the city! Come display your talent on our giant canvas (aka brick wall) for all those El riders, Cubs fans, and city clickers to see. Proposals are being accepted now through September 10th, 2018. Call […]